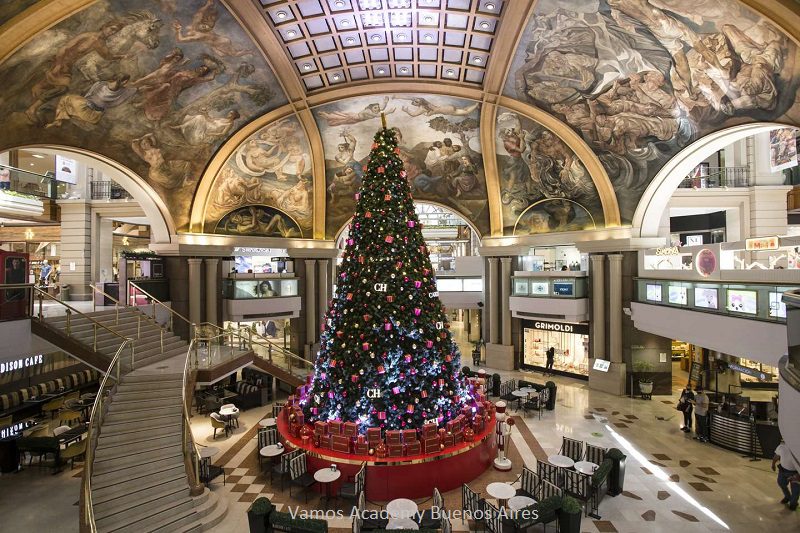 Here’s the essentials to spending Christmas in Buenos Aires: traditions, food, culture and even means of transportation.

Christmas in Buenos Aires has a very different atmosphere than the one in many cities in the Northern Hemisphere. It won’t be freezing cold outside, for one, so there won’t be any snow melting and no getting your car out of an avalanche.

In Buenos Aires, December is right in the middle of summer; it’s very hot, humid and sunny. Second, the city is very quiet, as many porteños (Buenos Aires residents) are traveling for summer holidays. Many people prefer to get out of the city and head towards the beaches near Buenos Aires (like in Punta del Este of Uruguay or Mar del Plata, Argentina), or south to Patagonia to enjoy more temperate climates (like in Bariloche or Calafate, Argentina). That being said, there are still many porteños and tourists who stick out the heat and celebrate the holidays in the city!

Unlike other parts of the world, where presents are opened on Christmas morning, in Argentina people open their presents on Christmas Eve. Santa Claus will most likely show up to the party, and you’ll see many Santa Clauses in malls as well.

If you already know anything about Argentine culture, then you’ll know family is everything. This explains the huge, huge family dinner thrown by however has the biggest house (or, probably, backyard or garden.) Dinners tend to feature a colorful display of food and decorations.

Generally speaking, Christmas is not really as much celebrated as in western countries. There’s no Christmas carol-singing, radio isn’t taken over by 24-hour Holiday music, there’s no elaborate turkey feast. However, don’t be discouraged: other aspects of it are still going strong, like doing some (abundant) shopping, giving out presents, spending some quality family time, and going on holidays. Of course–and most importantly–, get ready for a great Christmas party!

Setting up the Christmas tree: In public spaces like plazas, stores, and shopping centers you’ll see decorations going up in November – this is so they can go on sale before everyone decorates theirs at home on December 8th. December 8th is the day when everyone always puts up their decorations and trees, because it’s the Feast of the Immaculate Conception (Inmaculada Concepción de Maria). Even for people who aren’t necessarily practicing Christians, this day signals the start of the Christmas season here in Argentina. All of the decorations and trees then stay up until January 6, the day of Epiphany (el Día de los Reyes Magos), which is the day after the twelve days of Christmas have ended.

A night out: It’s customary for the younger generations to go out past midnight to a club or “boliche” while the oldest members of the family stay inside. Partying in the streets or at a house gathering is the usual. Remember that most of Argentine nightlife takes place after roughly 11 PM.

Caroling: Argentina is not a country where people go singing from door to door to spread holiday cheer. While in many parts of North America and Europe it’s common to hear Christmas tunes whenever you turn on the radio or walk into a store, that’s not at all typical here! There will be many holiday decorations –trees, wreaths, garlands, lights, Papa Noel’s, and anything else you can think of–but there won’t be singing.

Fireworks: What would Christmas be without fuegos artificiales? It’s also very common during this time of year to send up spherical lanterns, known as globos. These little paper globes have fires lit inside them which causes them to float up through the air over the houses like football-sized hot-air balloons. These can actually be quite dangerous, though, since after a point they tend to catch on fire and fall.

The usual suspects are:

Pan Dulce: It literally means ‘sweet bread’. It’s white bread traditionally filled with nuts and dried fruits. Some may come in more fancy ingredients like chocolate chips, orange and lemon zest or even in whole-wheat bread. You can find store-made or homemade pan dulce; the first variety is basically at any store, while the second can be found at (mostly) fancy panaderías (specialized bread shops.)

Budín con/sin frutas: They are cake loafs. The ones with dried fruits are like the western fruit cakes, but they could be of lemon flavor, plain vanilla, marble, or so on, depending on personal taste.

Turrón: This sweet treat is pretty much only available in the supermarket during Christmas time. It has a Moorish origin and the kinds that we eat in Argentina usually come in two types: the hard ones are like nougats, typically come in a big block of almonds tightly packed in a candy made with honey, sugar and egg whites. Some other varieties are sandwiched between two thin pieces of rice paper; the soft ones are where the almonds are ground down to a paste and made into a candy with sugar and oil.

Mantecol: This is a peanut-based nougat. They are a classic sweet snack and dessert all year round, but especially around Christmas and the New Year.

Sidra: This is the sparkling, alcoholic apple cider. Some come in non-alcoholic version, suitable for children. Keep it well chilled; it’ll be the drink to keep you ‘bubbly’, and in a holiday mood towards the champagne toast at midnight.

Champagne: Argentines love their champagne. I’d go so far to say that this is the most important item featured in any kind of Argentine celebrations. The most popular brand is Chandon, but there are a wide range to choose from, from cheap to expensive, and from traditional to pink ones.

Other foods: For a fancier version, you can also find wine, cheese, olives, olive oil, dried fruits, gourmet chocolates and other types of sweets. If you are lucky to be invited to join an Argentine Christmas gathering, bring one of these baskets (or put one together yourself, you can find all these in the supermarket easily), and you’ll surely impress them!

Too much to choose from, right? From setting up the christmas tree to house decor and even outside decorations, read on if you don’t want to go into just any business for your buy (and we’ve even included some personal recs!) You’ll be able to find Christmas shopping at these places for sure:

And here’s some of our mid-to-high budget decor reccomendations:

Special Christmas Events in Buenos Aires: Where to Find Them

Plaza Mayor is as famous as pan dulce can get. It’s a traditional panadería that makes homemade pan dulce with figs, toasted nuts, and fruits including maraschino cherries. It’s usually open from 10 AM to 8 PM, and only sells the pan dulce by the kilo, and year-round.

Address: Right on the corner of Venezuela and San José

At Madero Tango, there is a wide array of options for spending your Christmas Evening. They host a Christmas masquerade ball. We’ll quote from their website, as we couln’t have said it better ourselves: “A delicious dinner with Christmas table and breakfast at dawn, an excellent tango show, a magnificent fireworks show over the river and a unique party where we will give you your mask as a gift. Everything together with the best view of Puerto Madero. Transfers included from 7.30 p.m. and return at 00.30 a.m., every half hour. Free drinks all night, water, soda, beer, wine and champagne. DJ until dawn”

For those seeking a bit of a luxurious getaway for Christmas season, it’s gonna cost quite a bit of money. However, if you’re looking for a high-end experience for dinner, you can go to traditional Buenos Aires hotels located in the Puerto Madero neighborhood (located in the port of Buenos Aires, right by the river.) Most of these have a spectacular view and outdoor seating, but you might not want to miss the architecture inside!

These hotels offer special dinners, five-course or even six-course meals (e.g.: an appetizer, entreé, main dish, pre-dessert and dessert.) You can expect Christmas-themed food and decor. Also, you’ll be able to have access to a private show and high-end meals from Argentina’s star chefs.

Prices vary, but most of these outings are very expensive for the average Argentine lifestyle. All these dinners require prior reservation (we recommend getting ahead of the game: the earlier you call, the better, as the places will be packed.)

Finding a Means of Transport During the Holiday Season

Nearing the “fin de fiesta” (end of the party), you should make plans for how you’ll get back to your hotel/Airbnb/housing. Public transportation is very limited starting around 9 PM on Christmas Eve. Because most people are out celebrating, you won’t be able to get a bus till 6 AM at the very least, much less find a cab.

Ridehailing apps, however, do tend to be active during that time. Taxi apps will most likely have high waiting times, so we recommend other apps like Uber, Cabify or Didi. So be careful not to get stranded too far away from home later in the night!

If you manage to get a lift home from a friend, lucky you. Streets will be almost completely empty, so there will be no pesky traffic. There might be, however, more alcoholism control on the roads.