The traditional dress in Latin America is so much more than just a costume.

It provides a link to the region’s history, as well as a portrayal of each countries’ national identity. Furthermore, most of Latin American countries shares cultural Spanish (or Portuguese, in the case of Brazil), Indigenous, and African influences due to their shared history of pre-Columbian America, colonisation and the trans-Atlantic slave trade. With that being said, in this article, we will observe how Argentina, Brazil and  Panamá have each evolved through history into their very own distinct characters, by focusing on their unique traditional dress.

Traditional dress in Argentina is very much connected to the nation’s socio-historical narrative and folklore; the land, dance, and music.

There are various types of traditional attire within Argentina, such as those related to Tango and Chacarera. However, due to the transient nature of this article, I have decided to focus on the Gaucho figure.

The Gaucho emerged in Argentina back in the 17th Century, after the Spaniards introduced the horse to the New World. It is one of the most iconic costumes of Argentine folklore and a national symbol of pride, in both its male and female versions. In any case, the Gaucho is understood to be a type of semi-nomadic cowboy from the plains and areas near Argentina, as well as some regions of Uruguay, Paraguay, the Bolivian Chaco, and southern Brazil.

What to See When You Visit Argentina

The classic Argentine male gaucho costume combines a pair of black trousers with a white shirt and, above it, an open short sleeve jacket. These garments form the basis of the “gaucho-look”, which also includes a series of key accessories that are required in order for the ensemble to be considered truly “gaucho”. The centrepiece accessory is a red handkerchief tied with a knot to the front of the neck. Other important features include a brown sash and boots, which always go above the “bombachas”, which are loose-fitted cotton pants. Finally, this costume also includes a kind of characteristic reddish beret or brimmed hat.

During the winter months, the Gaucho will wear a poncho; a garment typically made of thick wool, often designed with different colours and patterns such as stripes, with an opening in the centre for the head. In its origins, the poncho was used by Indians, mestizos, whites, gauchos, etc. and is still used throughout Latin America today.

As for the females, they may be referred to as “china” (this term derived from Quechua, meaning girl or female), “paisana”, “gaucha” and “prenda”. However “paisana” is probably the most popular choice in contemporary Argentina.

Traditionally, the paisana had the role of accompanying the gaucho and, therefore, her traditional dress is characterized by its simplicity.

The paisana’s attire consists of a long skirt worn without a petticoat, along with a kind of long-sleeved sweater that goes up to the neck. On her feet, the paisana wears “alpargatas”, the Spanish word for espadrilles, as a symbol of her honesty. And finally, the traditional hairstyle are two braids that fall to both sides of the shoulders.

Brazil is the 5th biggest country in the world, and certainly the largest in Latin America.  Each region boasts it’s very own culture within the country’s already impressive melting-pot cultural backdrop. So, there is obviously going to be more than one traditional costume that encapsulates Brazilian culture, such as Samba and Amazonas. For the purpose of this article, I have chosen to focus the female figure of “Baiana de Acaraje” of Salvador de Bahia, a region well-known for embracing its strong African heritage through its wild carnival and soul food. The “Baiana de acaraje”, or simply “Baiana” is the name given to the women that dedicate themselves to the traditional occupation of selling acarajé, a dish made from peeled beans formed into a ball and then deep-fried in palm-oil. The “baiana” dress is a blend of ancient European Baroque style; white lace details and multiple layers. She wears a long, wide skirt or “saia” that she combines white blouses that are embroidered by hand. 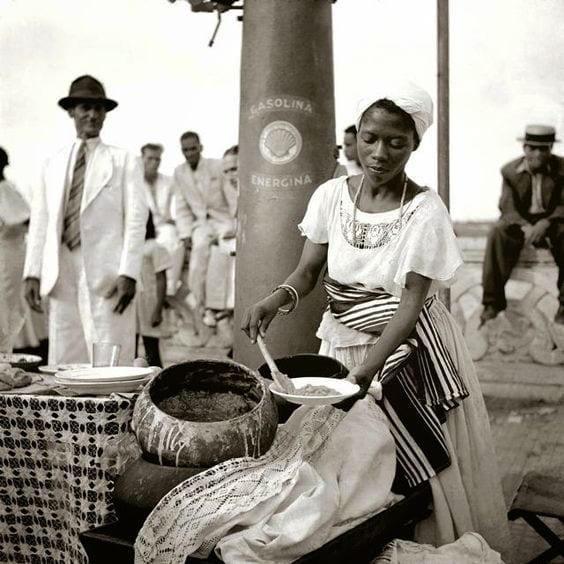 Below the flowing skirt, she wears “calçolão” which are white cotton pants. As for accessories, the “baiana” wears a “singuê”, a kind of shawl that is worn as a bodice, “pano da costa” which is a cloth often made of muslin, which is then rolled on the head and worn as a turban. She also dons vibrant, long beaded necklaces and large earrings of different designs. All in all, the outfit is reminiscent of not only African Indian tribes but also expresses the regions Afro-Islamic roots. WITH VAMOS ACADEMY YOU CAN:

The “Pollera” is the name given to the Panamanian traditional dress. It literally means“a big one-piece skirt.” Used mostly in traditional festivities and folklore throughout Spanish-speaking Latin America. It’s made using different materials such as cotton and wool and is usually decorated with colourful pompoms and embroidery of flowers and regional animals. The polleras are a form of Spanish colonial dress that were made sometime between the 16th and 17th centuries by craftsmen in the indigenous populations of the Andes. In Panama, handmade polleras are used during festivals or celebrations. Girls and women would generally have two skirts during their lifetime: one before age 16 and the other into adulthood. A single skirt can cost anywhere from several hundred to several thousand dollars and take up to a year to create. The gold and pearl beads and tembleques provided by a skirt are generally passed down as heritages throughout the generations.