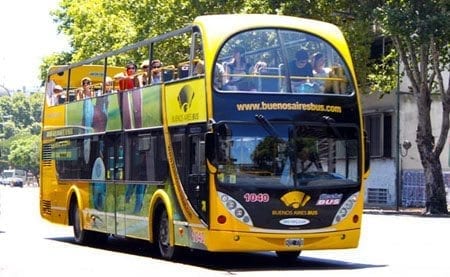 Whether you are visiting Buenos Aires for just a few days or a few months, you won’t go wrong by taking the yellow bus, or officially the Buenos Aires Yellow Bus, as your first activity to get a feel of the city. It is a hop-on hop-off tour service on a double-decker bus organized by the city government.

Since its inauguration in 2010, the route has grown from 12 stops to 33 stops plus a separate extension of a 5-stop northern route. With the expansion of its fleet, the buses run much more frequently too at every 10-20 mins. The bus route covers all the must-see spots in the city and the whole tour lasts around 3-4 hours depending on traffic (we are in a busy city after all!). Audio guide in 10 different languages with headphones are also available on board, so you know what you are looking at when you are passing them by.

If you have the time to hop off, definitely get off to walk around and explore more. Even if you don’t, after this bus tour, you can check off, if not all, most of the attractions mentioned in your guide books. The roof is always off during good weather, and on a sunny day, it’s really a perfect way to cruise around town and get a tan. If you like the rain, or not, you don’t have to cancel your plan to take the yellow bus either because they will put the roof up. No uncomfortable poncho raincoat necessary.

Buenos Aires is a very walkable city but there are also a lot to cover (I know because I have entertained many visiting friends and family during the pre-yellow-bus era). So, whether you’re already or soon-to-be in town, check out the Buenos Aires bus, it’s an enjoyable way to get (re)acquainted with this beautiful city.

Keep in mind: boarding is by arrival order no matter whether participants booked in advance or not. With complimentary audio commentary in a choice of 10 languages the route takes nearly 3 hours if you choose not to get off at one of the 33 stops. It is a great way to see many of the cities popular sights from the comfort of a specially designed tourist mover, complete with an open-air top level on sunny days. Buses run every 20-30 minutes, from 9am to 5pm Recently, especially on weekends, the buses were leaving full from the first stop at the pedestrian street of Florida. Obviously, the company released they had a huge demand for the service and did what many would do in the same situation, increased the price.

What was once a bargain 50ARS in 2010 ticket will now set back a foreign tourist 670 ARS or USD 33 per person. Personally, I think, if you are only in Buenos Aires for short amount of time, the big yellow bus is still a good deal for a three-hour tour of the city, just no longer the bargain it once was.