Recoleta Cemetery (Cementerio de la Recoleta) is often listed as one of the most beautiful cemeteries in the world. After spending an afternoon wandering through the cobblestone streets lined with tombs I would have to agree. Recoleta Cemetery is located in the prestigious neighborhood of Recoleta, in the city of Buenos Aires. In the early eighteenth century Monks of The Order of the Recoletos arrived in this area. The cemetery originally started as their holy grounds, however when the Order disbanded in 1822, the convent gardens were converted into Buenos Aires´s first public cemetery. Buried here is a who’s who of notable Argentinians from politicians (including 26 Argentine presidents) to Nobel Prize winners, and of course Argentina’s beloved Eva Peron. The cemetery has over 6,400 mausoleums and is a crash course of architectural style through the ages. Beautiful examples of Neoclassical, Neo Gothic, Art Nuevo and Art Deco can all be found here. With marble statues and decorative iron gates this city of the dead is full of breathtaking art. Some of the mausoleums are relatively new, modern even, while others show their age in dust and disrepair. Peeking inside the crypts was an unusual experience. You are faced with dusty, wooden coffins, carved marble coffins, shrines to the dead, relics, photos and flowers. All are evidence and a life, clues to who is buried there and who was left behind. I felt as if I were inside history when I stepped inside Recoleta Cemetery. Of course no cemetery would be complete without a ghost story or two and Recoleta Cemetery is no exception. There are many stories of hauntings and curious happenings here. One of tales that resonated with me the most was the tragic story of 19-year-old Rufina Cambecéres, who was a socialite and the only daughter of a famous Argentine writer, died suddenly in 1902. It was raining on the day her casket arrived at Recoleta so it was left in the Chapel overnight. Legend has it that a cemetery worker noticed the casket lid had been shifted, and since Rufina was from a wealthy family, they thought someone might be after her valuables and have robbed the grave. However, when her casket was opened and closely examined, the truth was much worse. None of her jewelry was missing but instead, they found scratch marks on her and all over the inside of the casket: she had been mistakenly presumed dead and was buried alive! Later thought that she had collapsed from an attack of cataplexy, which caused several doctors to believe that she was dead. When she woke up and found herself sealed in a casket, the fright, the terror and the failed attempt of escape eventually gave her a heart attack which became the real cause of her unfortunate death.

To this day, no one knows for sure if that was really what truly happened but it is no doubt one of the most known urban legends of Recoleta Cemetery. The tomb of Rufina is is not easy to miss because it is one of the most beautiful ones in the “City of the Dead”. You will be greeted by a life-sized statue of her guarding her resting place. When peer in, you will see her beautifully-carved marble coffin inside. The cemetery is open every day from 8 am – 6 pm, free entry. Maps are available for purchase, though not necessary, I would recommend grabbing one if you want to find someone in particular. There are also free tours available.  You will learn many stories like Rufina’s from the hour-long guided tour: Spanish tours – Tuesday to Friday at 11am; weekends and public holidays at 11am and 3pm. English tours are available on Tuesdays and Thursdays at 11am. Whenever you go, also keep your eyes on the lookout for the cutest and fluffiest “residents” of Recoleta Cemetery — the many cemetery cats.3

Entrance to the cemetery.

View of the domes. 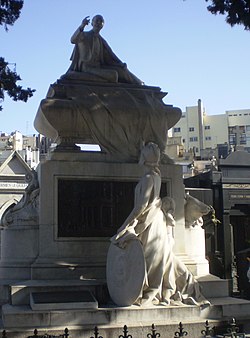 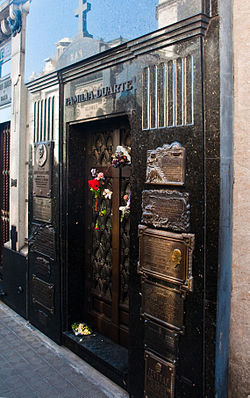 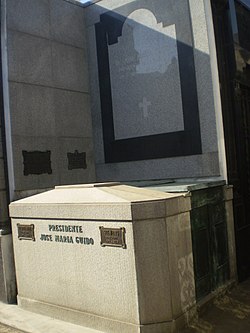 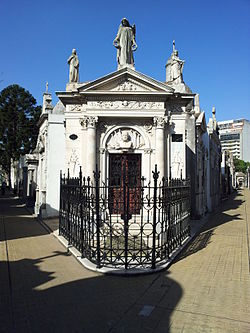 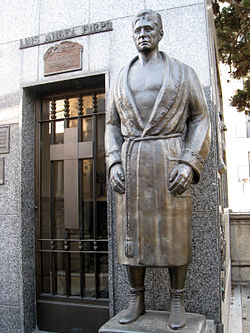 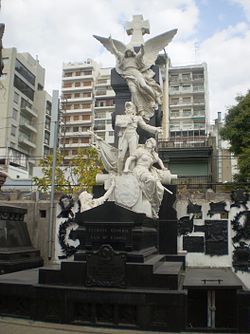 Tomb of President Raúl Alfonsín, taken after a state funeral. 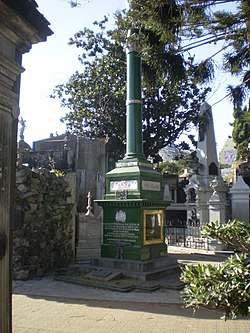 Tomb of Irish-born Admiral and founder of the Argentine Navy William Brown. 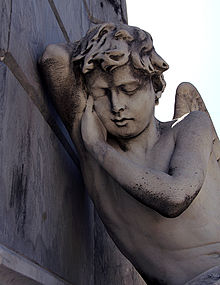 If you want to learn more about our Spanish School Buenos Aires enter our website https://vamospanish.com or visit us at Viamonte 1516, Buenos Aires, Argentina +54-11-5984-2201 If you enjoyed reading our blog we would love if you could share it below. Thank you!