Definite and Indefinite Articles in Spanish

What is the difference between definite and indefinite articles in Spanish? 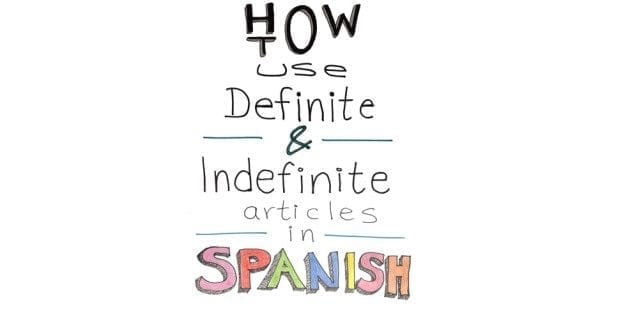 What is an article in Spanish? Artículo Definido e Indefinido

Just like English, Spanish has a definite and an indefinite article and the concept remains the same.

Definite and Indefinite Articles in Spanish

The definite article is used to refer to something specific.  In English the article would be ‘the’. In Spanish, you have 4 options depending on the gender and the number.

Of course, most rules have exceptions and this rule is no different.

When a feminine and singular noun begins with a stressed á, a, or ha, the masculine definite article is used instead, to aide in pronunciation. When the same noun is plural, the regular feminine article is used.

The definite article ‘el’ is different to the pronoun ‘él’ which means he. “Él” will always appear on its own but “el” will always be followed by a noun. Look at the following sentence:

If you want to know more, check out our other blogs posts. Here is one about Por vs Para: Service Type
Spanish Classes
Provider Name
Vamos Spanish Academy,
Viamonte 1516,Recoleta,Buenos Aires-C1055 ABD,
Telephone No.+1-888-808-1242
Area
Definite and Indefinite Articles in Spanish
Description
In order to learn any language, you need to spend some time understanding basic grammar and while it is not the most exciting aspect of learning a new language, it is important. One essential element of Spanish is the article.