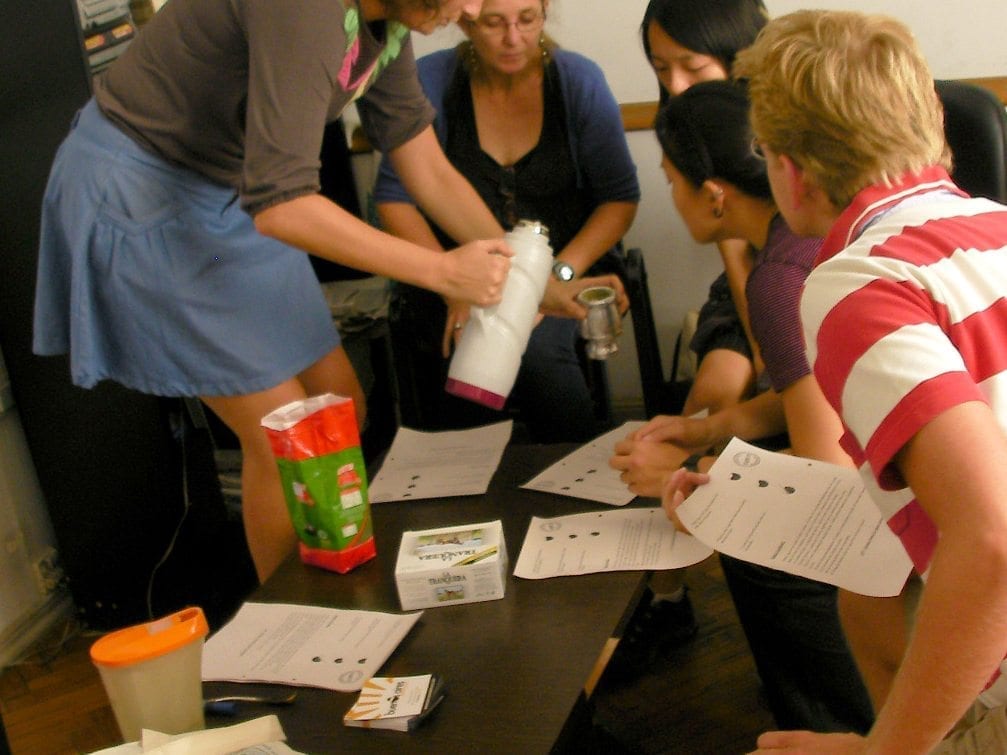 Mate – The Popular Drink from Argentina

Argentina is internationally renowned for its beef, wine, and tango, but one Argentine delicacy many foreigners are unfamiliar with is mate. Mate is an extremely popular beverage in Argentina. Made from a bitter herb, called yerba mate, the drink has an extensive history and a wealth of rituals and customs surrounding its consumption. Most foreigners find mate bitter, perhaps even unsavory, but Argentines adore it.

I had my first experience with mate at Vamos Spanish Academy. The school hosted an after-class workshop on the beverage, and I was given the opportunity to try it with an Argentine host and a group of international classmates. Our host explained the traditions surrounding the drink and gave us a lesson on how to properly enjoy the experience. She revealed that mate is a drink shared among friends, and consuming it with others is considered an intimate experience that brings the group closer together.

There is an extensive vocabulary associated with mate: the herb is called yerba; the vessel, traditionally made from a gourd, is called a mate; and the metal straw is the bombilla. The process of filling the mate gourd with water has its own verb: cebar, and the host, who refills the gourd between turns is called el cebador or la cebadora. Special mate thermoses are sold throughout Argentina, labeled with “tapon cebador” to indicate that they have special caps specifically created to facilitate mate consumption.

After explaining the mate vocabulary, our host told us about its history and customs. Mate consumption dates back to the pre-Colombian era in Argentina and parts of Paraguay and Uruguay, and the name “mate” comes from the indigenous word for gourd. When the conquistadores arrived in Argentina, they called mate the “hierba del demonio,” perhaps in acknowledgement of its stimulating, somewhat caffeine-like qualities.

When sharing mate with friends, several customs are important to remember. The cebador or cebadora fills the gourd with yerba and water, and arranges the bombilla. Other members of the group should be careful not to touch or move the bombilla when they receive the mate and instead should focus on consuming all of the liquid from the mate. When passing the mate around the group, everyone must remember to point the bombilla towards the recipient of the mate gourd. I made the mistake of forgetting where to point the bombilla when I first tried mate, but luckily my host was forgiving!

My first taste of mate was surprising. After hearing other foreigners decry the drink, I thought I would hate it. Instead, I found it bitter but oddly refreshing. While I’m not sure it’s something I could enjoy every day, I understand its appeal.

Yerba Mate vs. Coffee: The Internal Debate of a Confused Gringo in Argentina

After tasting mate and learning about its significance, I began realizing that mate is everywhere in Buenos Aires. Groups of friends gather in parks to share a mate, vendors at the weekend flea markets sip mate as tourists browse through their merchandise, and every Argentine home is stocked with at least one mate gourd and a container filled with the yerba. Mate is a very important part of Argentine culture, and I would recommend all visitors to Argentina try it at least once.